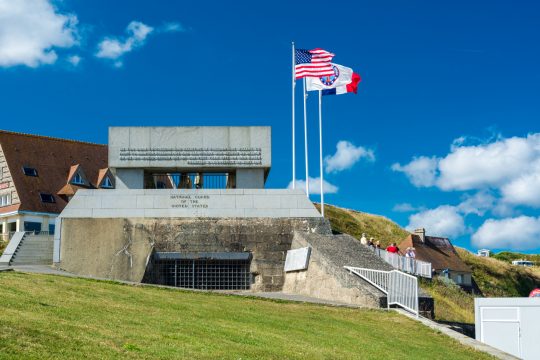 Memorial Day 2021 is behind us at this point…at least as a calendar entry. But today–June 6–we’re focused on the 77th anniversary of the Allied Invasion of Normandy, popularly known as D-Day. As we noted in our blog post last Monday, Memorial Day and reflection on events like D-Day lead us to pause and give serious thought to the freedoms we have and how they came to be. And how they came to be is the stuff of history, of legends who’ve given their lives as true patriots, and whose stories help bring the realism of our freedoms to life.

AMAC spokesman Robert Charles is a keen follower of exactly these types of stories and the biographies of those who have lived them. In his words, “these are the kinds of people who lift me, energize me, and give me a smile when the rest of the world is asleep, not listening, or indifferent to what really matters.  Our vets know.  They always have.” With Mr. Charles’ permission, we are sharing one of these poignant stories, this one a free-flowing recollection of a voice from his past and its lasting impression.

Doug Stevenson was one of my Winthrop High School teachers, neighbor in Wayne, father of six boys, former chicken farmer, avid storyteller — larger than life. I recall him best as Ben Franklin in our high school play, “1776.” He was compelling, believable. Memorial Day brings him to mind.

As Franklin, Doug leaned hard on a cane, involving every audience member in his cause — the fight for liberty, stakes of death, as if he meant every word — and he did. Because Doug was one of the boys who landed on Omaha Beach, Normandy, June 6, 1944. Dog-white sector, D-Day, promoted to captain on the beach, “dead everywhere,” soon to be a major.

Coincidentally, “1776” begins with the Continental Congress preparing to risk everything for liberty. The date is May 8, 1776.  Exactly 169 years later to the day, Doug’s generation did it again — and brought peace to Europe; the date of VE Day was May 8, 1945.

Yes, Doug meant it. Funny thing is, he never spoke about D-Day back then, or any place after — First Army, 49th AAA Brigade, up “300-foot escarpments,” “thick hedgerows,” “fields we believed were mined … until a French farmer staked a cow on one,” Carentan, St. Lo, Paris.

In time, his brigade defended installations across five nations. In May 1993, 28 years ago and 50 after these events, Doug honored a grandson with an easygoing interview. He pulled out old maps, turned time backwards, let his grandson see the past. That interview was captured on camera. Having known Doug all my life, his family generously let me see it. My eyes popped.

You might have thought in the gentle way Doug spoke with his grandson that he was describing a casual canoe trip. But no, Doug was talking about what may be the most existential moment in human history, a short stretch in which humanity either won or lost to the forces of darkness.

Doug was not just there — he was in the middle of there. After D-Day, a letter home: “No place on earth do I know as well as a few short strips of beach high promontories behind them … I visited one, at two o-clock in the morning, wet to the hip …”

In time, Doug’s brigade fought to Paris. In the Ardennes, December 1944, his brigade helped hold a paper-thin line — turning anti-aircraft guns on tanks, backing up the “Band of Brothers.”

There is more. In October 1944, Doug found himself lodged at Ardennes Inn, wild boar on a wall, no idea the Battle of the Bulge was coming. Doug recalled “snow on the ground,” Germans in retreat. His brigade went “right through” the Siegfried Line, “barb wire, dips, and concrete.”

Malmedy — soon famous for a Nazi massacre of POWs — lay nearby. Doug got tasked with recon. Something was going on. Germans were probing Ardennes — an unlikely place. Why? Doug took a jeep and machine gun to “scout and report back.” “I get four miles out … and here’s a great monster coming over the hill, one of those 88 tanks.”

These were German 88 mm guns on Tiger tanks, deployed with Panzers. Hitler had amassed 600 tanks, 200,000 troops, in a last-ditch counter-offensive aimed at shocking the Allies. It would cost tens of thousands of lives. Doug had stumbled on Hitler’s secret.

Retelling the discovery to his grandson, Doug is nonplussed. A column of tanks made him duck into the woods, scramble to HQ, informed their retreat. The truth is more sobering. Doug hit the German vanguard for the Bulge, Hitler’s 6th Panzer Army. Official “Unit History” notes “intelligence reports … middle of December” changed everything.

By 17 December, the brigade was “squarely in the middle … Everyone realized the precariousness of the situation … About 1430 [2:30 p.m.] a vehicle coming down the road from Malmedy reported small arms fire … Panzer elements were only minutes away …”

This marked the start of Germany pushing Allied lines back, a million men engaged. The small arms fire at Malmedy was the massacre, Waffen SS killing 84 American POWs. How important was Doug’s recon, at a time when aerial recon was non-existent? Likely, very.

General Omar Bradley’s autobiography notes: “The enemy had centered his blow … deep in the Ardennes, the most vulnerable point in our entire Allied line … Not until after the war, when interrogators tracked down the origins of the Ardennes counteroffensive, did we learn how grossly I had underrated the enemy’s intentions … Information from behind German lines thinned to a trickle … more and more we were forced to depend on … front line intelligence … Meanwhile, the agents we slipped through the enemy lines disappeared into the winter and were never heard from again.”

Countless books describe the Bulge. But all this begs the point. Doug did more than he cared tell. On return to Ardennes, his Inn was gone, race for a Rhine crossing on. Germans blew all bridges except Remagen, which the Luftwaffe tried to demolish, except Doug’s 49th AAA defended it — successfully. First Army got over with six divisions, 125,000 troops, accelerating war’s end.

What Doug did not say is that he lived through what many did not. Between June 6, 1944 and May 8, 1945, he saw more die than whole cities of Americans will ever see. Another letter home: “Someday, I will explain it all … and then forget it.”

He seems to have done that. Still, one citation reads: “Landing on Omaha Beach, Normandy, France early on June 6, 1944 under withering small arms and artillery fire, the Battery calmly and efficiently proceeded … and with bravery at Saint Lo, biggest AAA defense in history.” There are 15 similar unit citations.

Perhaps most humbling, as one watches Doug’s interview, is the casual way in which he describes his uniform, bronze star, silver, Croix de Guerre with star, division level award to one man, ribbons for this and that campaign.

The takeaway two decades ago is that Doug left sorrow behind, was awed by what America had done, no focus on himself.

My mind goes back to Doug as Ben Franklin, so real. Somehow Normandy, The Bulge, Remagen, made real his stage presence. To Doug, liberty, equality, and America’s greatness were tangible — fought for, earned, worth preserving. He defended them. And like Franklin, he involved his audience — he made us believe.

Wrote Franklin: “Tell me and I forget, teach me and I remember, involve me and I learn.”  Franklin did that. Doug did that.  Inspired by them, we must do that.  What was true on May 8, 1776, and May 8, 1945, is still true today. Liberty matters. Because it does, Memorial Day does.

Robert Charles grew up in Wayne, was assistant secretary of state under Colin Powell, served 10 years as a Navy intelligence officer (USNR), and in 2018 wrote “Eagles and Evergreens” about World War II veterans and their influence on rural America. Often back in Wayne, he will be for Memorial Day.