What’s Happening These Days on the “Robocall” Front? 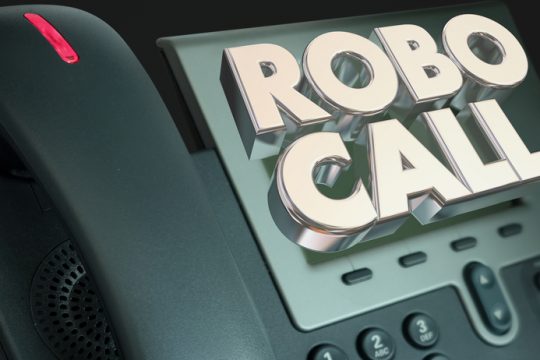 I don’t know if you’ve sensed it, but I’m personally seeing a drop-off in the annoying robocalls that have been bombarding my phone lines–land lines and cell services–for what seems like an eternity. They are still an incredible nuisance, especially when they leave no-content messages on your answering machine.

The good news is that statistics maintained by the Federal Trade Commission’s Do-Not-Call Registry do show a substantial reduction in reported robocalls during the months of the COVID-19 pandemic lockdown. The big question is whether this downward trend can be expected to continue, and it looks like the answer is, “No, it won’t.” The folks at AllAreaCodes.com, in fact, report that “Recently, complaints are still far below normal but are showing signs of returning to normal as the week beginning April 19th sees a 48% reduction.”

AllAreaCodes.com has made available to us a statistical recap of FTC robocall complaints during the height of the COVID-19 pandemic, noting that recorded complaints began dropping in the early stages of the pandemic lockdown, from a highpoint close to 15,000 per day in early March to an average of less than 6,000 per day by late-March. The curve flattened at that point and stayed low late-April, and as noted earlier is again creeping up. AllAreaCodes.com’s statistics also provide a state-by-state analysis of the complaint reductions, comparing March-April daily averages to February (prior to the pandemic lockdown).

So, is the low rate of robocall complaints a good thing? Well, in one sense it is, since it translates to fewer annoyances. But there is another viewpoint, as explained by AllAreaCodes.com, that the drop in complaints might reflect the degree of economic shutdown associated with efforts to control the pandemic’s spread. Here’s their analysis: “A high reduction in call complaints may be an early signal for how much the economy in each state is shutting down. A low reduction in complaints may indicate states that are continuing as usual and may risk the number of cases increasing – even if “continuing as usual” is because of the need for the next paycheck.”

Who knows? All that analysis aside, it’s pretty safe to say that the robocall plague will return in force as the economy rebounds, and unless and until the federal government focuses on the problem (unfortunately, there are higher-priority issues in play for the months ahead), we’ll just need to live with it. In the meantime, about all we can do is make sure we report all robocalls to the FTC via their Do-Not-Call Registry

3 comments about “What’s Happening These Days on the “Robocall” Front?”