Senior Use of Smartphones, Computers, and iPads Is on the Rise 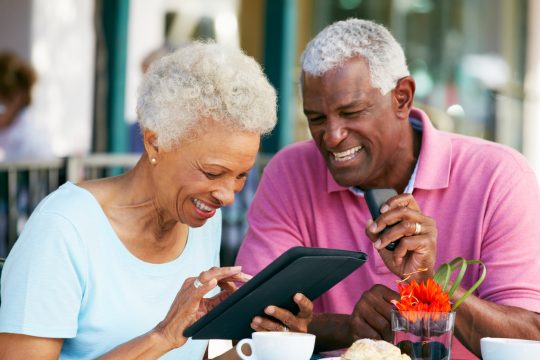 Editorial Note: This article was posted March 4, 2022 as a press release on the AMAC.us website. It was written by AMAC Foundation board member John Grimaldi, and draws attention to a persistent complaint voiced by just about everyone in the consuming public!

It turns out that you can teach an old dog new tricks. Just look at how America’s seniors have adopted cellphones, computers, and laptops. Middle age children of today’s seniors may soon start complaining that their moms and dads are spending too much time online and on their iPhones, says Rebecca Weber, CEO of the Association of Mature American Citizens [AMAC].

She notes that the 50-plus set has been adopting technology at a steady rate for years now, but the Covid pandemic has sped things up. A Pew Research study, she points out, shows that 73% of the 50 to 64 set and 45% of Americans 65 and older are familiar with and use social media sites.

Meanwhile, the Infocomm Media Development Authority [IMDA] tells us that a 2016 survey of seniors 75 years of age and older showed that just 11% of them were using smartphones, and the same survey conducted in 2020 showed that senior smartphone usage had skyrocketed to 60%. The same survey showed that only eight percent of 75-plus seniors were familiar with and used the Internet in 2016, and by 2020, 46% of super seniors were regularly online.

A lot of research has been conducted regarding the “hows” and “whys” of technology adoption among the elderly, according to the Journal of Geriatric Mental Health. They show that, “once their initial resistance of learning new technology was overcome- ‘enjoying the experience’ of using the mobile phone motivated them to use the device. Other contributory factors were ‘heightened self-esteem’ when they could perform certain chores by themselves such as paying bills or buying groceries or navigating around, and ‘feeling secure’ (because of various safety measures available on the cellphone), as well as more realistic, goal-directed outcomes such as information retrieval and communication. In addition, social influence or subjective norm in the theory of reasoned action research also influenced the use of mobile phones. Other studies too have identified different possible motivators for senior mobile phone use, including social influence, safety, security, autonomy, relatedness, and usefulness.”

Tiffany Esshaki, who writes for C&G Newspapers, reports that older folk have been slowly but surely embracing the fruits of technology and the pandemic helped speed things up for savvy seniors. Tiffany cites Molly McElroy, a 70-year-old resident of Auburn Hills, MI. According to McElroy,  “If you, like me, are a senior, which makes you a high risk for COVID-19, (social media) is how you carry on. You’re already limited at some level by age, driving less at night, and now you’re isolated. Or are you? Thanks to my hobbies — indolence and the Internet — I hardly feel impacted at all.”

Ageists will tell you that the elderly are not capable of navigating the intricate pathways of computer and smartphone communication. It’s not true. In a scholarly paper by Morgan Van Vleck, a Masters Research Fellow in Aging at Harvey A. Friedman Center for Aging at Washington University, St. Louis, MO, argues that the use of social media and technology by seniors is a welcoming development.

“The growing intergenerational nature of social media has been beneficial in allowing a place for people to build relationships based on common interests rather than age. The future of social media is an intergenerational one, with the aging population only set to increase. Instead of viewing a growing social media use among older adults as the “death” of these sites, it should be viewed as an avenue for possibility that arises when everyone is given a platform,” he says.

Notice: The links provided above connect readers to the full content of the referenced information. The URLs (internet addresses) for these links are valid on the posted date; AmacFoundation.org cannot guarantee the duration of the links’ validity. Providing linkage to external websites does not constitute endorsement of products or services advertised thereon.