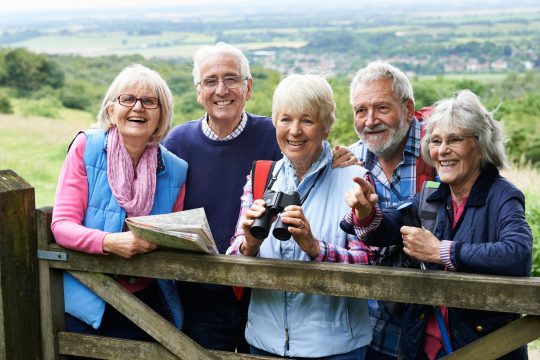 This report was posted on the National Institute on Aging‘s website just a few weeks ago. It’s a great read, drawing a correlation between social engagement and cognitive function. The study highlights conclusions that “Participating in social activities, such as visiting friends, volunteering, and getting out for events and trips, has been associated with better cognitive function, while low social engagement in late life has been associated with an increased risk of dementia.” In other words, staying actively engaged and socially active and engaged is believed to be a primary ingredient in maintaining a sound mind and the ability to reason intellectually, and to conversely combat some of the effects of age-related dementia.

Here’s the actual text of the NIH report:

Scientific evidence about the importance of remaining socially engaged as we age continues to grow. Participating in social activities, such as visiting friends, volunteering, and getting out for events and trips, has been associated with better cognitive function, while low social engagement in late life has been associated with an increased risk of dementia (Krueger, 2009; Saczynski, 2006). Other research has shown that support from a spouse/partner and friends alleviates loneliness and improves well-being in older adults. Recent findings from Dr. Emily Rogalski and colleagues at Northwestern University studying cognitive “SuperAgers” add more evidence about the importance of positive social relationships (Maher, 2017).

Who are cognitive SuperAgers?

Northwestern’s SuperAgers cohort is made up of people age 80 and older whose episodic memory (memories of past personal events) is comparable to people 25 to 30 years younger (age 50-65). Over the seven years the research team has followed this group, their episodic memory test scores have not declined significantly, indicating remarkably resilient memory. What factors contribute to their elite performance?

In looking at the brains of SuperAgers, researchers found that the volume of the anterior cingulate, a brain area important for emotion and attention, declines more slowly in cognitive SuperAgers than age-matched controls (Harrison, 2012). Further, post-mortem analysis of SuperAger brains showed greater number of Von Economo neurons in the anterior cingulate compared to controls. These neurons are hypothesized to be important for higher order social cognition and behaviors (Butti, 2013; Gefen, 2015).

To measure the effect of psychological well-being on SuperAgers and age-matched controls, Rogalski’s team administered memory tests and the Ryff 42-item Psychological Well-Being Questionnaire, comprised of six areas: Autonomy, Positive Relations with Others, Environmental Mastery, Personal Growth, Purpose in Life, and Self-Acceptance. Intriguingly, while both groups reported similarly high levels of psychological well-being across 5 of the 6 dimensions, SuperAgers scored significantly higher on the positive social relationships scale, which measures satisfying, high-quality relationships reported by the individual.

These data suggest that perceived high-quality social relationships may be an important factor in the maintenance of cognitive function in the SuperAgers. The results provide additional support for the importance of Von Economo neurons and the anterior cingulate in social cognition and behavior, and add to a growing literature about the importance of social engagement and positive social connections as we age.

Notice: The links provided above connects readers to the full content of the posted article and references. The URL (internet address) for these links are valid on the posted date; The AMAC Foundation cannot guarantee the duration of the links’ validity. Also, the opinions expressed in these postings are the viewpoints of the original source and are not explicitly endorsed by AMAC, Inc. or the AMAC Foundation, Inc.