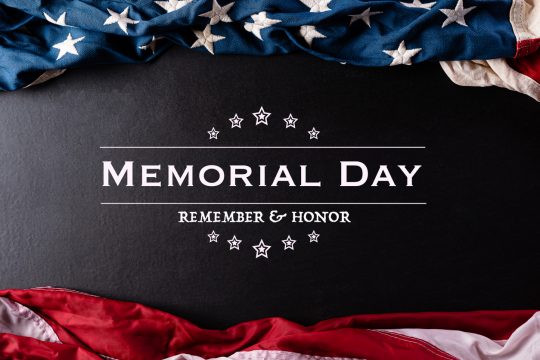 Memorial Day was conceived at military gravesites.  As early as 1866, women were decorating local graves of Civil War dead with flags and flowers.  Within two years, the practice was adopted by the military itself, and the first official ceremonies were conducted at Arlington National Cemetery.  As Arlington grew, developing its own rituals and traditions of honor, so did Memorial Day practices.

Now, three traditions mark the solemn tribute to fallen military heroes at Arlington.  The first occurs before the holiday weekend and is known simply as “Flags In.” All across the cemetery, small American flags are put in front of every grave, one boot length from the base of the headstone, by members of the 3rd U.S. Infantry Regiment, known as the Old Guard.  The second tradition is a remembrance ceremony held at the Memorial Amphitheater, a white marble structure in the classical style, which often features a presidential address.  The third event marking the day is a ceremony held at the Tomb of the Unknown Soldier, where the President lays a wreath to mark the day of remembrance.

While Arlington is the largest American military cemetery, and its rolling hills and pristine white markers have become an enduring symbol of the sacrifice of all military men and women, it is far from the only military cemetery in the country, and each will have their own special tributes today.

Almost 5,000 miles away, in Honolulu, Hawaii, is the National Memorial Cemetery of the Pacific.  Also called the Punchbowl, for the crater that the cemetery is nestled in, or Pūowaina, the original Hawaiian name for the area, it  opened in 1949 and has become the final resting place of many soldiers from WWII, Korea, and Vietnam.  Over 13,000 men and women are buried high above Honolulu, identified by granite markers set into the ground.  Notable burials include 70 men who perished on the USS Arizona; Ernie Pyle, a Pulitzer Prize-winning WWII correspondent; and Patsy Takemoto Mink, the first woman of color elected to Congress.

In addition to Memorial Day ceremonies that include speeches, wreaths, and salutes from an honor guard, the Punchbowl has a unique tradition of placing a lei on every grave.  These are created by the community at “Sew a Lei for Memorial Day” events, where volunteers make around 38,000 leis out of fresh flowers and leaves.

This year, one man is going the extra mile to make sure each grave is decorated.  Gary Hashimoto, who volunteers with the Boy Scouts and Girl Scouts, is calling for people to donate flower leis from their graduations to the cemetery.  The son of a veteran, Hashimoto recognizes the importance of honoring those who gave so much for us.  Especially since this year will be the first time in two years that the full Memorial Day celebrations are held due to COVID-19, he is urging people to ensure that these traditions can be carried on.

Just as the Civil War led to the creation of Arlington and WWII led to the Punchbowl, Americans also created new cemeteries to honor WWI dead—not in the United States, but scattered across Europe, many in France and Belgium.  To memorialize these resting places, the American Battle Memorial Commission (ABMC) was created in 1923.  Today, it maintains 26 burial grounds and 32 memorials in 17 foreign countries, as well as four memorials in the U.S.  These cemeteries are the resting place for over 124,000 Americans who gave their lives in WWI and WWII.

The ABMC also helps ensure a certain uniformity at every cemetery from Cambridge in England to Manila in the Philippines, which ensures every fallen American hero is given the proper respect that they deserve. The cemeteries are beautiful spaces, surrounded by greenery, filled with row after row of neat white markers.  There are chapels at each one, as well as monuments and memorials, often inscribed with the names of the missing whose graves are unknown.  Despite the many thousands of miles between them, these cemeteries are connected by common design and a common reverence for the sacrifice of those buried there.

The work of the ABMC is also not limited to just upkeeping the cemeteries, but keeping the memory of the fallen alive. One ongoing project, Operation Benjamin, is a joint effort by the ABMC, a non-profit, and the families of fallen military personnel to ensure that gravesites are marked by the right religious iconography. Unlike most national cemeteries within the United States, which mark graves with plain tablets, the foreign cemeteries of the ABMC use white crosses for Christian dead and Stars of David for Jewish dead.  In the chaos of war, some Jewish military personnel were buried under crosses instead of Stars of David.  Since 2018, Project Benjamin has set out to verify the religious affiliation of each service member laid to rest in foreign cemeteries.

Military cemeteries are a country’s highest demonstration of love for its sons and daughters.  Once a year, we go the extra mile in these places, with flags and flowers, with speeches and salutes, but the work of cemeteries is carried on day in and day out.  Crucial to all of these honors is the fact that each grave is the final resting place of an individual: not a number, but a name.  Who they were matters just as much as what they did.  A father who fought for his children’s freedom.  A young man who laid down his life for his friends.  A wife who endured fear, uncertainty, and loneliness to defend her family’s future.  Each one has their own personal marker, and each one receives their own personal flag, because each one made their own personal sacrifice.

Eleanor Vaughn is a writer living in Virginia.