Greatness in Journalism – The Standard Exists 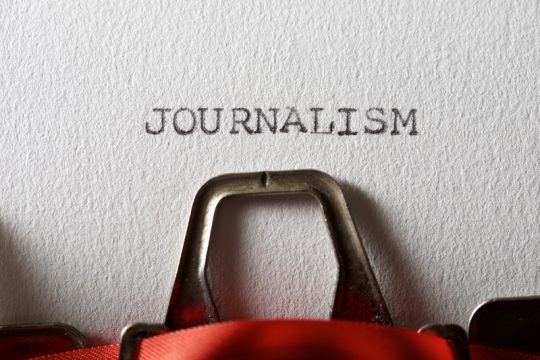 Today, I want you to look back with me – at two great journalists.  I want you to end your day happy, reflecting that – against all odds – a platinum standard exists for journalism.  Fair-minded people can be forgiven for asking, “Really?”  The answer is yes.  America produced heroes – in journalism.

The year was 1943.  The place Sicily, epic island at the tip of Italy’s boot.  Two fearless American journalists – who admired one another – were on the front lines, as in past invasions.  The North African campaign was over, liberation of Italy ahead, along with Normandy and Germany, Okinawa, and Iwo.

Ernie Pyle – if you have never read him, you should – had been writing columns from war’s front lines for an eternity.  He had won a Pulitzer writing about the common solider, highs and lows, sand, wind, mud, courage, fight, persistence, resilience.  The award barely phased him, as he was deep in it.

One day, he came upon an evac tent, first stop for the wounded.  In it was his buddy, Dick Tregaskis. Both were from the American Southwest, proud of roots, prouder of fighting Americans. Worth noting is the fact that both reporters lived on the front lines.  Both would report from Pacific and Europe.

Ernie was a farm boy who craved action, and by 1941 was in his 40’s, never drafted.  He met his wife Geraldine at a Halloween party, loved her from the get-go, and drove 9,000 miles in a Model T with her – before becoming America’s top aviation reporter, flying 100,000 miles.  Amelia Earhart said, “Any aviator who did not know Pyle was a nobody.”

In fall 1943, Ernie was known – but sitting in an evac tent with buddy Dick Tregaskis.  Dick was himself famous, painfully humble.  Dick had written “Guadalcanal Diary,” which sold half a million copies, and became a movie.  But he was now in a tough way.

What I am about to write, is why these two journalists were special, set a standard, remind us that good journalists are rare, great ones priceless.  Ernie was penning a book called “Brave Men,” and he had to include Dick.  Ernie never saw others as competitors – only friends.  He wrote with heart.

Dick, he said, “had been badly wounded … a shell fragment had gone through his helmet and ripped his skull open.”  Before continuing, know this:  Dick Tregaskis recovered.  Ernie wrote:  “That he was alive at all seemed a miracle.”

Ernie explained.  Dick had been hit in a firefight, no cover, then walked half a mile with that “ghastly wound,” underwent brain surgery, relearned use of his right arm, how to speak, write, and – incredibly – would become an heroic reporter again in the Pacific and Europe.

As Ernie reported, Dick “worked at it.”  Ernie described his buddy as tall, quiet, unabashed reader of Shakespeare, fearless.  Henry the 5th apparently stuck with Dick.  For a cut, try this one: https://www.bing.com/videos/search?q=henry+5th+utube&view=detail&mid=3A268FC9ED070D1DB3453A268FC9ED070D1DB345&FORM=VIRE.

In any event, Dick was hurting. Ernie gave him full credit.  He wrote that Dick lay on a cot, mud floor, no special treatment.  To set the record straight: “You would think that with as much war as Dick had seen, and after such a hairsbreadth escape, he might have been ready to call it a day.”  If me, confessed Ernie, I would have “gone home and rested on my laurels forever.”

In any event, not Dick.  America needed truth from the front, and both were committed to bring it. Ernie described this fellow reporter as “a deeply sincere and conscientious man, who did what he did because he felt he should.”  In time, Dick recovered, then boldly covered the Normandy invasion in 1944.

Ernie, beloved coast-to-coast for heart, honesty, sincerity, depth of concern for common soldiers, and love of country, this “land of the free and home of the brave” – would report fearlessly, uncomplaining, with unbroken devotion, until April 18, 1945.

Powered by love of country, an unbreakable bond with America’s soldiers, sailors, airmen and those leading, Pyle never shaved a corner, missed a chance to celebrate heroes in all, high and low, young and old, and was doing that on April 18 – when killed in action at the Battle of Okinawa.

Ernie Pyle was pure platinum, a living standard for straight journalism, from invasion front to American heart, restless, sleepless farm boy – hungry for action, striving to be equal to his time.  He was.  Pyle’s columns hit 400 daily papers, 300 weeklies, ended in books – are still read by folks like me, 75 years after he went down at Okinawa.

So here is the point.  Greatness in journalism exists, the standard has been set.  Ernie Pyle selflessly reported on colleague Dick Tregaskis, who ironically lived to 2003 – writing books from the frontlines of Guadalcanal and Normandy to Vietnam, even as Ernie died in 1945.

Pyle was the “best of the best.”  When Americans wonder “have we ever had great journalists,” the answer is yes.  The likes of Ernie Pyle and Dick Tregaskis stand before us – beacons, beckoning to patriotic, honest, earnest, heartfelt young Americans headed into journalism:  Reach higher, do more, love your country deeply, and honor those who came before.

At end of day, be happy knowing a standard of greatness – even in journalism – exists.  The need for modern journalists to follow that example lingers.  America has produced genuine heroes in journalism, patriots of a tough, uncompromising, humble, timeless sort.  We can again.  This is a good time to start.

Robert Charles is a former assistant secretary of state for President George W. Bush, former naval intelligence officer and litigator. He served in the Reagan and Bush 41 White Houses, as congressional counsel for five years, and wrote “Narcotics and Terrorism” (2003) and “Eagles and Evergreens” (2018), the latter on WWII vets in a Maine town.

This article originally appeared October 8, 2020 on the AMAC.us Opinion/Politics page.