The Connected Home: Coming Right At You! 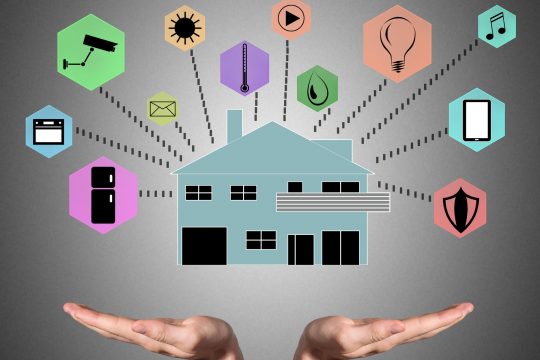 “Your smart mattress will personalize your sleep experience and notify loved ones when you get up in the morning. Smart carpet will control lights as you move around, so you don’t fall when you get up at night, and notify loved ones if someone falls. Your refrigerator will monitor your groceries and order them automatically … even your coffeemaker, if it notices you not drinking your coffee or conducting some odd behavior related to the machine, may well alert family members that there may be a problem.” These are comments from a soon-to-be released book titled “Rock Retirement” by Roger Whitney, a certified financial planner and advisor who specializes in retirement. It’s a glimpse into how the concept of “the connected home” or “the wired home” has the potential to impact the lives of virtually everybody.

The most recent issue of the AMAC Advantage quarterly magazine takes to concept further, exploring a wide variety of areas where the concept is having an impact on our lives. The article is titled, “The “Connected Home” is Coming, Ready or Not!” and here’s the full text:

You’ve probably heard of the automated factory, where robotics work together to build complex products in a day-to-day environment with only limited human intervention. Usually called “lights-out manufacturing” or the “unmanned factory,” it’s a concept that has become an accepted fact in today’s economy.

Now, picture your home as the “factory” where you live. You may not realize it, but your home is evolving in a fashion remarkably similar to the automated factory. The “connected home” or “smart home” has arrived, representing a concept driven by the forces of security, comfort, convenience, and efficiency. Just like the “unmanned factory,” picture your home and its internal components operating as an integrated system, where you as the factory manager establish how these components get along with each other, how they exchange data, and how they relate to the outside world, all from your smart phone or from something called a “Virtual Personal Assistant” or VPA.

The concept is not really as futuristic or as wild as you may think…many of its components have already worked their way into the mainstream marketplace.

So, What’s in The Connected Home?
The connected home can be defined as one where household appliances and services are enhanced by internet connectivity—a dwelling equipped not only for computer activity, but for entertainment, security, environmental services, and resident convenience. That’s a fairly general definition, and there’s a fair amount of confusion between the terms “connected” and “smart,” so let’s put some definition into play to help better visualize the concept:

Smart devices: Products falling under the definition of “smart” are built with an internal system of sensors, data storage, and some form of an embedded operating system that enable them to perform tasks on your behalf. They don’t necessarily need to be linked to other smart devices, and the tasks they perform are generally accomplished independently. Here are some examples of familiar smart devices:

o   Smart Thermostats – The logic capabilities in these types of devices can adjust temperatures within the home by turning heating and air conditioning units on and off according to a programmed schedule. They are “smart” in the sense that they can memorize your preferences and store them for later action.

o   Smart Washers and Dryers – These devices take a lot of the thinking out of the drudgery of doing the laundry. Dryers, for example, equipped with sensors that can measure moisture and regulate heat accordingly as the drying process takes place, or washers that can detect soil levels and dispense detergent in the right amount for the job.

o   Smartphones – Probably one of the most widely known smart devices, smartphones have the capability to do so much more than send and receive calls. With built-in cameras, calculators, voice recorders, and so on, they can serve as an “office in the pocket.”

o   Smart Refrigerators – How about the unit that allows you to see what’s inside without opening the door? Simply knocking on the door turns on LED lighting inside that lets you scan what’s located where without that annoying beep that tells you the door’s open too long. And then there’s the unit that allows you to swipe your foot across a sensor to open the door automatically when you’re unloading the groceries. Oh, and don’t forget the refrigerator that can scan your items’ barcodes and display a message on the exterior panel that tells you something is past it’s prime.

Connected Devices: Your imagination can go wild thinking about these types of smart appliances and how they might make your life better and simpler. They’re a marvel in themselves, but the real bang for the buck in the connected home concept doesn’t happen until you hook the smart devices together to form a network. And it happens through the introduction of a focal point that allows you, the connected home’s manager, to determine how the individual devices will interact and how far they will reach out to the world outside the home.

This is where the VPA comes in. Through the magic of voice recognition, WIFI, and artificial intelligence, the truly connected home represents a relationship between you, your home, and the outside world. The VPA can respond to your spoken commands or inquiries, and can direct smart devices to perform tasks. VPAs go by names like Siri, Cortana, Google Assistant, Amazon Echo, or any one of about two dozen popular devices currently being marketed. They’re here to serve you, and to act as a conduit between you and the machines networked within your home. Don’t have a VPA? Depending on how you’ve set up your smartphone, it’s likely that device can handle many of these tasks, as well.

For example, take the smart refrigerator. Being able to determine and report approaching expiration dates on perishables is one thing, but generating, transmitting, and executing an online order to the local grocery store is something else altogether. All you would need to do is activate the VPA by telling it to “go grocery shopping,” and a coding structure you set up will take care of the rest. Another example would be a wearable monitoring device that can connect you directly to your medical providers simply by telling the VPA to “call the doctor.”

The Pros and Cons of Connected Homes
So, what’s not to like in the world of smart/connected homes? Well, many people are turned off by what appears at first glance to be the need for a computer programming skillset. Network security is another area where concerns are placing a drag on the connected home’s march toward universal acceptance. The possibility of hackers accessing home networks is a very real concern for many folks, and with the constant barrage of data breaches reported by large companies these days, skepticism is understandable.

The need to achieve simplicity and better data privacy are well recognized in the industry, and as more and more interconnected products gain traction in the marketplace, it seems reasonable to expect that the connected home will become the de facto standard for living places in the future.