Christmas Greetings from the AMAC Foundation! 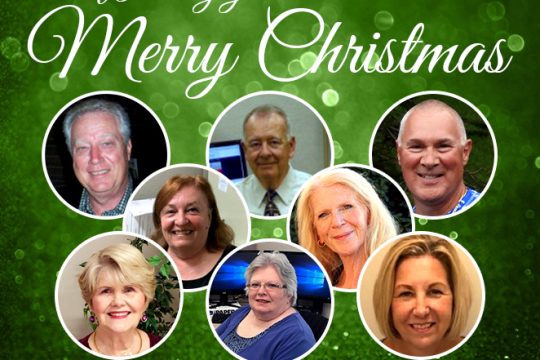 We’re wrapping up another eventful year here at the AMAC Foundation, and it’s time to pause and say thanks to all of our readers for the tremendous support we’ve received from those we serve. Sure, it’s been a trying year, given the ongoing pandemic cloud around us, the economic challenges all of us face, and the uncertainties that seem to appear almost daily, but despite the negativity we can always find room for optimism in many quarters.

Our mission at the Foundation is to support and educate America’s Seniors, and for the past eight years we’ve been doing just that. As you can see in the accompanying image, our Foundation Family has grown to meet the demand, and we look forward to 2022 and the prospects for continued growth in service to our constituents. All of us at the Foundation are proud of the role we play in AMAC’s service to America and, as Executive Director, I am gratified to serve with a team of professionals so committed to an important purpose.

We wish you and all your loved ones the very best for a peaceful Holiday Season. Know that we are truly grateful for the community we serve. And, in the spirit of the Christmas Season, we’ve included a copy of a post from several years ago that helps capture some of the historical aspects of this “most wonderful time of the year.” Take a read…

December 25 is celebrated as Christmas around the world, and to just about everybody this is a day like no other.

In fact, the entire Christmas season instills in many people a sense of peace and harmony that culminates in the ritual of Christmas Eve and Christmas Day joy and general good cheer. There’s no question that Christmas is the biggest holiday of the year, having both religious and traditional meaning to many people.

While the traditional observations of the Christmas season tend to vary from family to family and culture to culture, and while the spiritual interpretations are pretty much prescribed by whatever religious order a person follows, it’s interesting that the secular facts related to Christmas often fade into the background during its annual observance.

Some thoughts about Christ and Christmas

Let’s take a look at some of these historical facts about Christmas and its origin, and about the man on whom the whole notion of the season is focused. The broadest question, perhaps, is “Was Jesus an actual person?” and while most contemporary scholars and biblical researchers have concluded that there is enough consistent documentation to support that there indeed was such a being, the accounts of his birth, his life, and his teachings present differences of opinion among historians.

Here are some intriguing essentials associated with this universally popular topic:

The Historical Influence of Christ

Jesus is often referred to as “the center of history.” For example, H. G. Wells, author of “A Short History of the World,” is credited with the quote, “Jesus Christ is easily the most dominant figure in all history.” That, coupled with the recognition that Christmas is one of the two most universally-celebrated holidays in the world (New Years’ Day tops the list), make this a fascinating topic for researchers and laymen alike.

But perhaps the most telling assessment of the influence that Jesus Christ has had on the world can be found in the often-quoted words of Rev. Dr. James Allen Francis (1864-1928): “I am far within the mark when I say that all the armies that ever marched, and all the navies that were ever built, and all the parliaments that ever sat and all the kings that ever reigned, put together, have not affected the life of man upon the earth as powerfully as has this one solitary life.”

British historian and author J. M. Roberts (1928 –2003) penned a similar quote in the BBC TV series, The Triumph of the West, asserting “We could none of us today be what we are if a handful of Jews nearly two thousand years ago had not believed that they had known a great teacher, seen him crucified, dead, and buried, and then rise again.” Indeed, throughout the literary world, there are scores of correlations between Christianity and society as it has evolved through the past two centuries, with references to the concepts of private property, free enterprise, science, the American Constitution, and the arts. In fact, the very premise of individualism and human equality are consistently attributed to Christianity and the documented teachings of Jesus Christ. ★

(This article originally appeared in the December, 2014 Edition of the AMAC Magazine (Volume 8, Issue 4)