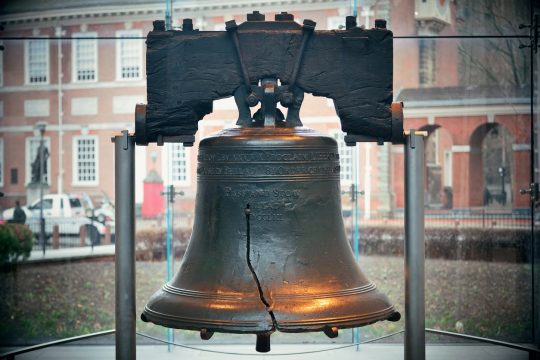 Tomorrow’s post on this page focuses on our country’s incredible National Park System and offers thoughts and planning tips for those contemplating a vacation tour of one or more of these fantastic destinations. Today, though, we’ll single out one of these iconic sites because of its relationship to the Independence Day holiday we’re recognizing.

I grew up in the Philadelphia suburbs, and attended my first two years of college in center city Philadelphia. On occasion, while awaiting the train (the Reading Railroad) to take me home at the end of classes, I sometimes took a walk from the 12th and Market Reading Terminal Market over to Independence National Historical Park on Market Street between Fifth and Sixth streets to enjoy the surroundings and to take a look at the Liberty Bell and the throngs of visitors educating their families on this fascinating piece of American history. Now in my later years, I realize that my casual approach to enjoying this emblem of our country’s heritage perhaps didn’t pay it the respect it was due. It’s sometimes sad that it takes age to realize the value of history, both as a remembrance of time gone by and as a precursor of days to come.

Nevertheless, I’ve become somewhat of a student of historical markers, and often reflect happily on the trips my wife and I took with our children to visit Independence National Historical Park, touring the surrounding area and pointing out the landmarks that made Philadelphia America’s first World Heritage City. After all, Philadelphia is considered to be the birthplace of the United States, the meeting place for the Founding Fathers as they deliberated on the formation of a new country.

For those with a keen interest in the history of the Liberty Bell and its place as a symbol of our country’s heritage, the National Park Service website offers extensive teaching aids. I’ve excerpted a few paragraphs for this post that I think will provide a good historical overview of the Liberty Bell story…

In the 18th century, citizens across the colonies depended on bells to communicate important news.
Bells might call them to put out fires, notify them of an approaching merchant ship, warn them about a
possible attack by Indians or enemy soldiers, or tell them to gather to hear news important to the
community. From the start, the bell that would become known as the Liberty Bell rang out for larger,
more national purposes. Originally, it was commissioned for the Pennsylvania State House, which was
built between 1732 and 1756. It knelled to mark the death of monarchs and pealed for the coronation of
George III. It was muffled to toll the Stamp Act and was rung joyously when that act was repealed. It
was probably rung on July 8, 1776, to gather Philadelphians to hear the first public reading of the
Declaration of Independence.

Some basic information about the Liberty Bell is found on the bell itself. On the waist is the inscription
“PASS AND STOW”—the last names of the founders who cast the bell. Under the founders’ names are
the letters “PHILADA” (an abbreviation for Philadelphia) and the numbers “MDCCLIII” (1753), the year
the bell was made. The inscription encircling the top of the bell reads: “BY ORDER OF THE
ASSEMBLY OF THE PROVINCE OF PENSYLVANIA [sic] FOR THE STATE HOUSE IN PHILADA.” It
is often incorrectly noted that there is a misspelling on the Liberty Bell. In the 18th century, spelling was
not standardized and it was acceptable to spell Pennsylvania with one “n,” or in a number of other
ways. The copy of the letter written by the Speaker of the Pennsylvania Assembly specifying the bell’s
inscription spells Pennsylvania with only one “n.”

The top line of the inscription is a verse from the Bible, Leviticus chapter 25, verse 10: “PROCLAIM
LIBERTY THROUGHOUT ALL THE LAND UNTO ALL THE INHABITANTS THEREOF LEV. XXV X,”
and it was this inscription that fostered the transformation of the old State House bell into the Liberty
Bell.

First called the “Liberty Bell” by abolitionist publications in the 1830s, the bell thereafter was adopted as
a symbol to promote a wide variety of causes, from women’s rights to civil rights, to protests against
political oppression.