With age come new vulnerabilities that can make any of us susceptible to elder abuse, says AMAC 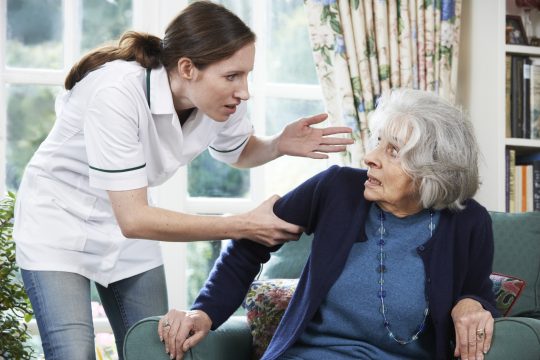 WASHINGTON, DC, Aug 18 – Reports of physical and financial abuse of the elderly are on the rise throughout the country.  It’s a crime that, experts say, is largely underreported.  But, a new light needs to be shed on this dirty little secret, says Dan Weber, president of the Association of Mature American Citizens [AMAC].

“Older Americans are easy targets in most cases.  Many of them depend on caregivers for survival and that makes them beholden and vulnerable.  It also can make them reluctant to let anyone know what is happening to them.  You’d think that friends and family would be the first to notice that an aging neighbor or relative is being abused.  But, the sad fact is that in too many cases it is a family member or a friend that is perpetrating the abuse.”

It’s up to “those of us with a conscience,” says Weber, to root out any instances of ill treatment.   The alarming truth is that for each case of abuse that is reported there are dozens more that are not.

The Elder Justice Roadmap project, supported by the Departments of Justice and Health and Human Services, has a broad-ranging definition of elder abuse: “physical, sexual, or psychological abuse, as well as neglect, abandonments, and financial exploitation of an older person by another person or entity, that occurs in any setting (e.g. home, community, or facility), either in a relationship where there is an expectation of trust and/or when an older person is targeted based on age or disability.”

If you suspect that someone whom you know is the victim of abuse, check it out.  Signs of physical abuse are obvious.  They include unexplained injuries including new bruises and abrasions.  If you notice that an aging relative or friend is making too many trips to the bank or is suddenly running up mysterious charges on a credit card, he or she may be a victim of fraud.  And, if you notice unusual weight loss or curious behavior, they could be signs of neglect or emotional abuse.

Nursing homes get most of the blame for elder abuse.  But in too many cases, according to the National Center on Elder Abuse, the perpetrators are family members.

“Elder abuse is a much too pervasive problem in America where three and a half million men and women celebrate their 65th birthdays each and every year.  And, where each year more people live longer than ever before.  It is no longer unusual for us to live to be as old as 80, 90 and 100 years or more these days thanks to healthier lifestyles and the miracle of modern medicine.  But, with age come new vulnerabilities that can make any of us susceptible to the crimes of angry and greedy predators.  And, that’s why it is up to younger friends and family – those who truly care – to keep a watchful eye open for anomalies that indicate older loved ones may be victims.”

The Association of Mature American Citizens [http://www.amac.us] is a vibrant, vital senior advocacy organization that takes its marching orders from its members.  We act and speak on their behalf, protecting their interests and offering a practical insight on how to best solve the problems they face today.  Live long and make a difference by joining us today at http://amac.us/join-amac.