A Beginner’s Guide to Social Security 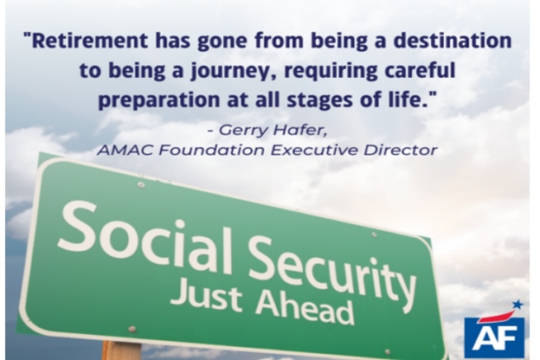 This article first appeared on Mediaplanet Future of Personal Health

For many folks, retirement is a destination. Thoughts of someday kicking back and reflecting on a career well executed, or a history of meeting the challenges of supporting a family, or the simple satisfaction of being a part of a powerful economic engine, all serve to propel us through our working years toward a target: that next life phase. But dreaming about it is one thing; planning for it is quite another.

It’s no secret to anyone in today’s workforce that the landscape is changing. Conventional retirement benefits like defined-benefit pension plans, now estimated to be available to only 15% of the workforce, are disappearing in favor of defined-contribution plans, leaving retirees on their own to ensure adequate finances to cover those golden years. Personal savings also emerges as a key component of retirement financial planning, as does the decision on when to exit the workforce.

In short, retirement has gone from being a destination to being a journey, requiring careful preparation at all stages of life. Fortunately, one component of retirement income — Social Security — remains consistent in its role of replacing a substantial portion of a family’s pre-retirement income. For well over eight decades, Social Security has steadfastly delivered on its pledge to help seniors avoid poverty in their later years, and it remains as a solid piece of the “three-legged stool” on which retirement rests.

This clichéd “three-legged stool” analogy raises a crucial point in retirement planning: Social Security was never intended to completely fund one’s post-career financial need. In fact, the program today replaces just 37% of an average worker’s pre-retirement earnings. As a result, the decision of when to file for Social Security benefits takes on considerable strategic importance for those aging into eligibility, particularly those who will be relying heavily on that benefit.

When to file for benefits

Age 62 is the earliest point at which an eligible worker can begin to draw benefits and, even today, that is by far the most popular age to file. What needs to be clearly understood, though, is that filing for benefits at that age will result in a severely discounted monthly benefit — 30%, in fact, for those born in 1960 or later. Waiting to full retirement age ensures monthly benefits will be 100% of one’s earned benefit, while waiting beyond full retirement age will increase that benefit by about 8% per year up to age 70. Here’s a quick, straightforward mathematical view: A monthly benefit at full retirement age of $2,000 will be reduced to $1,400 if claimed at age 62 or increased to $2,480 if deferred to age 70.

But the impact of early filing for Social Security goes beyond the basic calculation of monthly benefit amounts. For example, in the event of a claimant’s death, a surviving spouse will receive 100% of the claimant’s benefit at time of death. An early claim of benefits would result in the surviving spouse receiving less than the benefit that would be available had the claimant deferred until full retirement age or later.

Will Social Security be enough?

That’s a question relating directly to the point that retirement is a journey. Any journey logically starts with a plan, or a map designed to take one to their destination. That plan, then, should focus on everything needed to ensure that the destination is reached with a financial buffer that will allow for a comfortable retirement, with adequate savings and deferred financial resources to draw on in those later years. If done well, the future retiree will be able to live comfortably, but, if not done well, the issue of when to file for Social Security benefits takes on added significance.

The larger issue here is the long-term future of Social Security and its ability to continue to pay promised benefits in the future. Given the potential for reduced benefits resulting from the much-discussed solvency problem, it becomes even more critical that new Social Security participants take steps to ensure their benefits are maximized for the long haul.