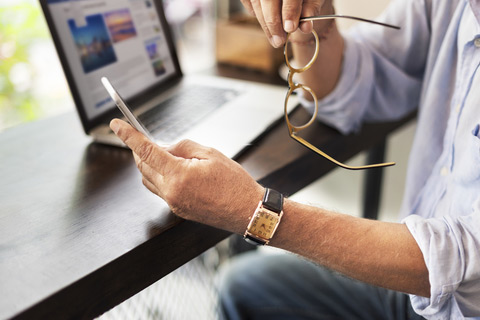 A Pew Research Center Internet Project study concluded that “A significant majority of older adults say they need assistance when it comes to using new digital devices. Just 18% would feel comfortable learning to use a new technology device such as a smartphone or tablet on their own, while 77% indicate they would need someone to help walk them through the process. And among seniors who go online but do not currently use social networking sites such as Facebook or Twitter, 56% would need assistance if they wanted to use these sites to connect with friends or family members.”

Pew researchers also reported that, of those seniors who to not currently use the Internet, only 16% in the survey population indicated disinterest in using this technology, while roughly two-thirds said they’d need help to go online.

With these and other anecdotal reports as an impetus, the Foundation has determined that this is indeed an area that warrants attention. Accordingly, we have included this as a target area for us to proceed with the development of a project effort as described in the next few paragraphs.

One of the long-range objectives of the Foundation involves assisting older Americans in a variety of areas that can enrich their lives and enhance their well-being. One of the more specific topics to be addressed in this objective involves computer literacy, and the need that older Americans have to acquaint themselves with the rapidly advancing world of technology and its place in their daily lives. Most services offered to seniors involve technology at some level, from receipt of Social Security payments, to applying for Medicare, to obtaining forms and documentation on government services, and so on. The common denominator in virtually all commerce affecting seniors is the ability to operate a computer, whether it’s a laptop, a tablet, or a smart phone.

To address this issue, the Foundation in 2015 launched a “technology fundamentals” program whereby AMAC members and the public in general could be acquainted with the evolving world of computer-based technology, with emphasis on the mainstream items they come face-to-face with daily. Initially, we focused on workshops designed to help seniors make the transition to new personal computer operating systems, specifically addressing the trauma of adapting to Windows 8 and Windows 10 for those familiar and comfortable with prior operating systems (like Windows 7, XP, etc.) Several training sessions were held on this specific topic.

In 2016, we partnered with Lady Lake Library to promote sessions covering iPhone and iPad fundamentals, and will be seeking to continue exploring this area in 2017 and beyond, and will be researching the possibility of expanding to a variety of related technology topics (Word Processing, spreadsheets, Social Media, and the like).

In conjunction with this effort, the Foundation intends at some point in the future to enlist younger Americans, on a volunteer basis, to serve as instructional aides via a “Junior Ambassador Program.” It’s no secret that youth across the nation are highly proficient in fundamental uses of technology, and that computers, automation, and telecommunications concepts are a routine part of their lives. The role of these Junior Ambassador volunteers would be to provide, under the auspices of an organized and Foundation-sanctioned structure, one-on-one or group counseling to older Americans on the basics of using technologies, as well as the essentials of navigating the internet to accomplish activities that can enrich their lives.

The Junior Ambassador Program component of this project could look to organizations like Junior Achievement, Boys and Girls Clubs of America, and similar groups for volunteer resources who could work with materials readily available from a variety of sources to teach and demonstrate computer fundamentals. In fact, the AMAC Ambassador Program itself could be the focal point for conducting the recruitment and organizational tasks necessary to launch a program of this type, with centralized acquisition of materials coordinated by Foundation staff. With the availability of materials supplied by technology vendors, usually at no cost, and with local organizations providing facilities at little or no cost, it is expected that this would be an economically feasible way to promote the Foundation and produce tremendous benefit for the Foundation’s constituency.